How has the EAHP developed?

At a scientific congress in Strasbourg a number of hospital pharmacists from different European countries decided that they should establish a new European association to represent their common interests. Thus in 1969, the seeds of EAHP were sown. On 6 March 1972, the representatives of six European countries signed the first Statutes of the European Association of Hospital Pharmacists, in The Hague, The Netherlands. The first President of EAHP was Marcel Lebas from France.

Membership within EAHP is open to countries members of the Council of Europe.

On the 1st of August 2011, the EAHP officially became an International Not-for-Profit Organization, and adjusted its policy to better face modern challenges.

EAHP represents and develops the hospital pharmacy profession within Europe in order to ensure the continuous improvement of care and outcomes for patients in the hospital setting. This is achieved through science, research, education, practice, as well as sharing best-practice and responsibility with other healthcare professionals.

What are the goals of the EAHP?

*EAHP defines Continuing Pharmacy Education (CPE) as per the ACPE definition which states that "Continuing education for the profession of pharmacy is a structured educational activity designed or intended to support the continuing development of pharmacists and/or pharmacy technicians to maintain and enhance their competence. Continuing pharmacy education (CPE) should promote problem-solving and critical thinking and be applicable to the practice of pharmacy. "

Structure of the EAHP

The prime governing body is the General Assembly, which meets annually and elects the Board of the Association. The General Assembly is a delegate conference at which each member state may have up to three delegates. Every delegation has one vote regardless of size.

The Board of Directors is the Executive Body of the Association and is elected for a three-year term of office, with the possibility to be re-elected. The responsibility for the core activities of the association are shared between the different directors. The Board normally meets four times a year in addition to meetings during the Congress and the General Assembly.

The Board carries out the policies agreed at the General Assembly, and designs and coordinates the implementation of the strategic goals of the association, with the support of the EAHP staff. In addition, the Board is closely involved in the control of the official journal of the Association, European Journal of Hospital Pharmacy (EJHP). The Board is also closely involved in the organisation of the annual EAHP Congress of Hospital Pharmacy, with one director chairing the congress organising committee and another chairing the scientific committee.

EAHP is funded by:

All accounts are audited both by EAHP auditors, appointed by the General Assembly and external auditors.

Click HERE to view the EAHP Code of Conduct. 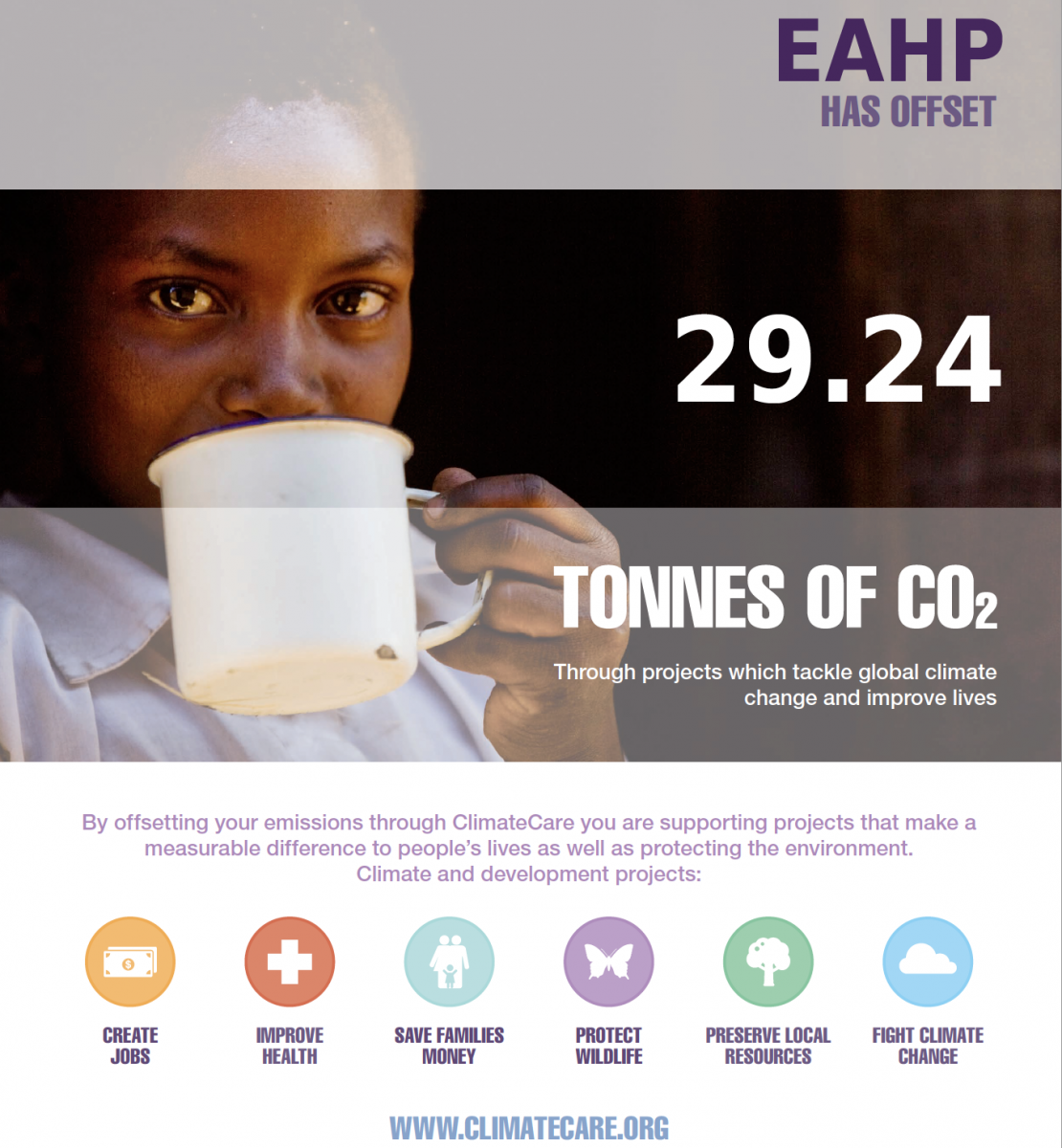 EAHP join forces with climate and sustainable development experts from ClimateCare to offset the carbon emissions associated with the air travel of the Association’s Board members to and from Board meetings. Through projects which tackle global climate change.

By offsetting emissions through ClimateCare, EAHP is supporting projects that make a measurable difference to people’s lives. The LifeStraw Carbon For Water project relies on finance from offsetting to deliver safe water to 4 million people in Kenya. It was the first project to link water provision with carbon credits at scale and has been recognised by the United Nations. The Gyapa Stoves project supports local entrepreneurs to manufacture and distribute safe, efficient cookstoves to households in Ghana. Run on the ground by our partners Relief International, the Gyapa stove cuts charcoal use by up to 50%, saving families money and reducing harmful smoke emissions.