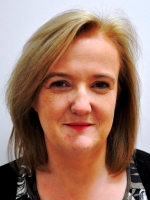 Anne Black (BSc (Hons) in Pharmacy) is Assistant Director of Pharmacy - Quality Assurance at Newcastle upon Tyne Hospitals NHS Foundation Trust. She is a pharmacist and a Qualified Person for Investigational Medicinal Products.

Mrs. Black qualified as a pharmacist 1991 and began her career at The Ipswich Hospital NHS Trust as a Basic Grade Pharmacist and subsequently became the QA Pharmacist. She was one of the first cohort of students to study for and attain the Postgraduate Diploma in Pharmaceutical Technology and Quality Assurance from the University of Leeds.

She later returned to the North East, spending three years as Technical Services Manager for a commercial Specials Manufacturer before returning to the NHS in a QA role. Mrs. Black took up her current post in January 2013.

Mrs. Black works mostly within the traditional pharmaceutical arena but has developed an interest in advanced therapy medicinal products since becoming involved with the quality management of the Newcastle Cellular Therapies facility. She has introduced a governance system for ATMPs within her organisation.