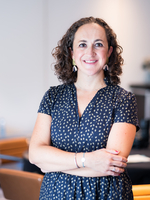 Ms. Edurne Fernández de Gamarra Martínez is currently a clinical pharmacist at Hospital Santa Creu i Sant Pau (Barcelona). She is focused on critical care, paediatrics, infectious diseases, pharmacokinetics and drug safety. She is also residents' preceptor at her Pharmacy Department and the delegate from Catalunya at the Board of the Spanish Society of Hospital Pharmacy. She develops teaching activities at Universitat Ramon Llull-Blanquerna.

Ms. Edurne Fernández de Gamarra Martínez studied Pharmacy at the Complutense University of Madrid and became licensed pharmacist in 2002. From 2004 to 2008 she followed the Residency Training Program and obtained the tittle of Hospital Pharmacist Specialist in 2008.

She also has a Diploma in International Public Health from the National Health School (Spain), a Master Degree in Antimicrobial Therapy (Autonomous University in Barcelona) and in 2013 she became a Board Certified Pharmacotherapy Specialist (by the Board of Pharmacy Specialties from the US).

No conflict of interest declared.