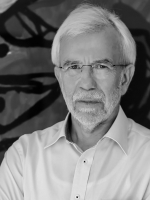 Prof Dr med Wolf-Dieter Ludwig has been the Chairman of the Drug Commission of the German Medical Association and a Co-Editor of "DER ARZNEIMITTELBRIEF" (ISDB) since 2006. He also is a Member of the Management Board of the European Medicines Agency as representative of the European Doctor's Association since 2013. From 2001 to August 2017, he was the Medical Director and Head of the Department for Haematology, Oncology, Tumour Immunology and Palliative Care at the HELIOS Clinic Berlin-Buch (formerly Charité).

Prof Dr med Ludwig studied medicine at the universities of Louvain, Innsbruck and Berlin. He got his Master Degree and PhD from the Free University of Berlin, with Degrees for specialisation in internal medicine, transfusion medicine and haematology/oncology.