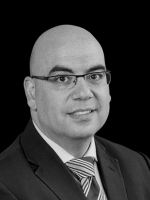 Synergy satellite event: Anticoagulants – show me the evidence! (supported by an educational grant from Bayer) (22nd Congress of the EAHP)

Mr Sotiris Antoniou has a particular interest in improving anticoagulation for stroke prevention in patients with atrial fibrillation. In addition, Mr Antoniou is actively involved in the training and development of clinical pharmacists working with the UKCPA and Royal Pharmaceutical Society.