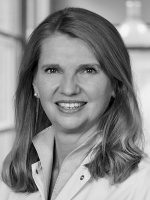 Mrs Almut Weygand is currently a Hospital Pharmacist at the St. Bernward Hospital in Hildesheim. She is responsible for the management of the department of pharmacy, budget controlling, drug information and further education in clinical pharmacy.

Mrs Almut Weygand studied pharmacy at the University of Münster/Westfalen and became a licensed pharmacist in 1993. In 1999, she gained further education in clinical pharmacy and obtained a MSc at Dresden International University in hospital pharmacy in 2013.