You can subscribe to receive the EAHP EU Monitor by email HERE.

The Government of Slovakia recently hosted a meeting of European Union (EU) Health Ministers at which the topic of medicines shortages, and the prospects for greater inter-governmental collaboration, received prominent attention.

Taking place in Bratislava between 3rd and 4th October 2016, subsequent reports have shined some light on the nature of the discussions. The meeting took place in the context of Slovakia's assumption of the 6 month rotating Presidency of the EU Council of Ministers.

"Ministers of health discussed the issue of shortages of medicines for human use, which is at the top of the political agenda in many European countries. Low prices of medicines leading to parallel exports, disruption in production and shortages of active substance are among the reasons for the problem. Ministers agreed that Member States can succeed in solving this issue through early and operational exchanges of information and regular mapping of the situation. Cooperation between Member States in this area is of high priority. 'At the forum, we focused particularly on identifying the main reasons for shortages of medicines and on seeking possible solutions to this issue. Our goal is to secure quality, safe and accessible treatment for all our patients,' said the Slovak Minister of Health, Tomáš Drucker."

Italian Health Minister Beatrice Lorenzin spoke in particular favour of joint EU action on medicines shortages stating: "A common system of information would help EU Member States to have an overall view of the phenomenon, and permit early warning and appropriate actions to be taken to prevent stock-outs".

Simon Harris, Minister of Health for the Republic of Ireland publicly welcomed the attention on the topic, respecting the "significant impact" for health services created by medicines shortages. More information HERE.

Meanwhile, the United Kingdom Government offered "caution on whether an EU wide solution to these problems was practically possible" whilst otherwise agreeing on the value of EU Governments "working together and sharing information to tackle medicine shortages".

At an accompanying press conference for the meeting EU Health Commissioner Vytenis Andriukaitis confirmed the ability of countries to introduce measures to restict parallel trade of medicines to prevent medicines shortages, so long as these are proportionate. He also stated that medicines shortages are being experienced by all countries, and therefore the issues need to be debated "in a more detailed manner".

More information HERE (from 18 minutes in)

**EU Monitor Readers with an interest in the medicines shortages topic are reminded that opportunities remain to be involved in a new COST (Cooperation in Science and Technology) Action on medicines shortages. More information HERE.

Responding to the meeting, EAHP Board Member Aida Batista, and policy lead on medicines shortages, said:

"I cannot congratulate the Slovak Presidency of the EU enough for taking up the pressing problem that all health systems in Europe are facing in respect to medicines shortages. As so often at the EU level though, it is always possible to put forward legal reasons not to cooperate on health issues, but it is always the patient interest that suffers when that occurs. I earnestly hope this opening discussion between Governments can create the necessary momentum for the forthcoming Maltese and Estonian Presidencies to make further progress."

The European Commission has published its own evaluation of the 2011-2016 EU Action Plan on Antimicrobial Resistance (AMR), alongside an external evaluation report produced by RAND Europe.

In its own evaluation of the Action Plan, the 149 page document notes that the legal scope for EU action in respect to AMR is more limited in the human health sphere than it is in veterinary health, which impacts the level of action the EU can take. Furthermore, no specific funding was ever associated with the 2011-2016 Action Plan.

Drawing on reports from the European Centre for Disease Prevention and Control (ECDC) over the period 2011-16, the Commission's Evaluation Report notes that antimicrobial resistance "is still worrying for gram-negative pathogens [across the EU], with high and, in many cases, increasing resistance percentages reported from many parts of Europe".

However, in respect to new antibiotics, the evaluation report notes that: "Over the period 2012-2015 there were five antibiotics (subgroup of antimicrobials)61 containing new active substances that were authorised via the centralised procedure. Furthermore, three antituberculotics for Multi Drug Resistant -TB were authorised for rare diseases. The recently authorised antibiotics remain those of known classes and more breakthrough antibacterial active substances with new mechanisms of actions are needed".

On public awareness in respect to AMR, the evaluation report notes marginal improvements: "Nowadays still most surveyed persons are aware that unnecessary use of antibiotics makes them become ineffective (84% in 2016 versus 83% in 2010) and that you should only stop taking antibiotics after taking all of the prescribed dose (82% in 2016, this was a new question). The number of people that is aware that antibiotics are ineffective against colds and flu is slightly increased (56% in 2013 versus 47% in 2010).... The results still vary considerably from one Member State to another, and also between socio-demographic profiles".

Overall, the Commission's evaluation report concludes: "Despite substantial progress made at EU level in addressing problems identified in 2011, the AMR problem is persisting and continued action is needed to combat it".

An accompanying external evaluation of the EU AMR Action Plan 2011-2016 has also been published, produced by the RAND consultancy.

The RAND evaluation report highlighted wide variance in implementation of AMR-focused activities between EU Member States, but also drew attention to the positive difference the EU is making to the global antimicrobial research agenda.

The RAND evaluation report recommends that the EU should in future:

Following the publication of these evaluation reports, on the 28th October 2016, during a speech in Lithuania, EU Health Commissioner Vytenis Andriukaitis confirmed that he will publish a new EU Action Plan on Antimicrobial Resistance in 2017 "that will continue to establish the EU as the leader in the fight against antimicrobial resistance".

The new Action plan will focus on supporting EU Member States, particularly in establishing, implementing and monitoring their National Action Plans. The plan will also bring together EU funds and instruments in order to promote innovation and research against AMR.

Mr Andriukaitis also used his speech to encourage EU Governments to speed up their consideration of Commission proposals for tighter regulations on antibiotic use in the veterinary sector. He also explained that the Commission does not currently have plans for new regulation on antibiotic use in the human sector, but would instead construct a 'One-Health antimicrobial resistance network' to bring together Member State experts on both human and animal health. The European Commission is also seeking to include antimicrobial resistance chapters within the proposed EU-USA trade agreement.

Supplementing the information provided in Mr Andriukaitis's speech, the European Commission thereafter published a "roadmap" to give stakeholders more of a flavour of what to expect in the next EU AMR Action Plan.

Starting from the premise "Member States cannot succeed in the fight against AMR if they work in isolation", the Road Map suggests that the European Commission will in future, amongst other measures:

Finally, it has been announced that the European Commission has formally requested that the European Medicines Agency (EMA), European Centre for Disease Prevention and Control (ECDC) and European Food Safety Authority (EFSA) work together to "propose a list of indicators that will enable risk managers to monitor the reduction of antimicrobial resistance and the use of antimicrobials in humans, food-producing animals and food".

The indicators will be delivered in the second half of 2017.

"Whilst it is  laudable that the European Commission is committing to a future EU Action Plan on AMR, I want to emphasise again the need for a relentless focus on achieving more prudent use of antimicrobials in the human health sector. EAHP suggests this should include defining at the European level the roles of various healthcare professionals in achieving prudent use. The role of hospital pharmacists, and other healthcare professionals, should be set out in European and national plans. For hospital pharmacists this includes our role in antimicrobial stewardship teams, monitoring and supporting other healthcare professionals in decision-making, and counselling patients on appropriate use of antibiotics." 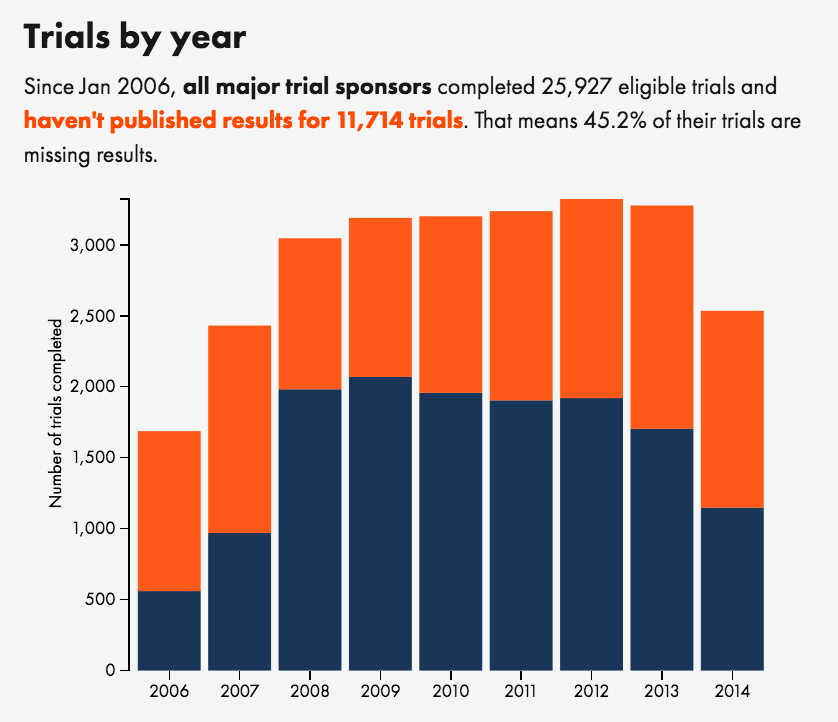 A new transparency study has confirmed that roughly half of all clinical trials run by pharmaceutical companies, universities and other major research sponsors remain unpublished.

TrialsTracker is a tool developed at the University of Oxford that automatically rates transparency on clinical trials by checking if there are results available in clinicaltrials.gov and PubMed.

Meanwhile, in a move hailed as a landmark for transparency in medical science, the European Medicines Agency has begun to publish details of the full clinical-trial data that it receives from pharmaceutical companies.

On 20 October, the agency published 100 clinical reports about two EMA-approved medicines (carfilzomib, a cancer drug, and lesinurad, a gout treatment) that together run to around 260,000 pages. The disclosures make the EMA the first major regulatory agency to publish the warts-and-all results of clinical investigations that developers of medicines submit when they apply for the agency's approval to market medicines in the European Union.

These clinical study reports (CSRs) are much more detailed than the papers that companies publish in scientific journals — which studies have shown are an "incomplete source of information on new medicines", says Larry Peiperl, the chief editor of PLoS Medicine. The CSRs include both positive and negative results, and details of drugs' adverse effects.

EJHP: Hospital doctors' views of, collaborations with and expectations of clinical pharmacists

The online first edition of the European Journal of Hospital Pharmacy (EJHP) has this week published an original article examining the views of hospital doctors towards clinical pharmacists.