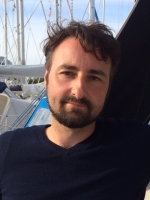 Mr. Thiesen (Master in Knowledge Management and IT) is Project manager at site Rigshospitalet.

Over the last 10 years, Mr. Thiesen has worked with focus on projects within IT/automation, LEAN and Pharma production projects. Lately, he has worked with qualification and validating of the production robot at the Copenhagen pharmacy (site Rigshoispitalet) and preparing for the next robot implementation project at Herlev hospital (near Copenhagen). From 2012 to 2015, he has been involved in a project focusing on implementing a production robot from Loccioni Humancare. This also means that he has been involved in change management processes over the last 3 years, leading Kaizen and KPI lean meetings, facilitating and preparing communicating, training and executing workshops within a aseptic production setup. In 2014, together with a small project team, he finalised an innovation project designing, building and testing a production tool for (GMP) production. The tool has been sold and tested at several Danish Hospital Pharmacies.

Mr. Thiesen is interested in LEAN, innovation and implementation of new technology.