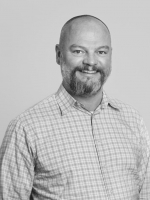 Synergy Satellite Event: Biosimilars in cancer care - the next challenge (financial support was provided by Pfizer Limited as a Medical and Educational Goods and Service) (23rd Congress of the EAHP)

Mr Gustaf Befrits is a health economist with the Stockholm County Council.

Gustaf Befrits has a Master’s degree in Health Economics from the Karolinska Institute in Stockholm.

Gustaf Befrits has several years of experience from the pharmaceutical and medical technology industry. In 2009 he joined the TLV, the Swedish National Reimbursement Authority as a health economist. He has also served as an expert in the EU commission project regarding uptake of biosimilars under the wider project “Platform on Access to Medicines in Europe”. Gustaf Befrits has worked extensively reevaluating the TNF-alfa inhibitors at both national and regional levels. Since 2013 he works for the Stockholm County Council which is the organisation responsible for supplying health care to the Stockholm region of approximately 2 million inhabitants. In this capacity, he has coordinated the introduction of biosimilar TNF-alfa inhibitors in Stockholm.