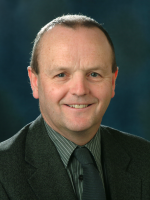 Prof. Scott (BSc in Pharmacy, PhD in Pharmacology) is Head of Pharmacy and Medicines Management at the Northern Health & Social Care Trust.

Prof. Michael Scott has held a number of positions within the hospital service sector of the Health & Social Care system in Northern Ireland since registration in 1982. He was awarded a PhD in Pharmacology in 1982. In 1994, he established the first academic practice unit in the province in conjunction with the Queens University Belfast. He has published numerous full papers and made numerous conference presentations worldwide. He has also led teams that have won national and regional awards relating to medicines management and infectious diseases work. In 2004, he was made a fellow of the Pharmaceutical Society of Northern Ireland. In June 2009, he was made an honorary Professor of Pharmacy Practice at QUB. He was awarded the GHP 2010 gold medal for outstanding contribution to the health service at national level. In 2013, the medicines management system that he led on was awarded three star status under the European Innovation Partnership Programme. In 2014 he received the award for outstanding contribution to pharmacy in Northern Ireland from the Ulster Chemist Association.

4. Conflict of interest: jointly sharing agreement for the development of the Yarra Software