Medication errors are one of the most common causes of preventable adverse events in the healthcare system. A complete identification of a medicine, up to the moment of administration, is therefore a key element of a safe medicines dispensing procedure in hospitals.  Indeed, preliminary studies have suggested the use of bar codes on medicines up to the single unit can help to reduce medication error rates by 41.4%.  (Poon EG et al. Effect of Bar-Code Technology on the Safety of Medication Administration. N Eng J Med 2010;362:1698-707)

In recognition of the patient safety case, and the effect on reducing errors, it has been a regulatory requirement in the USA since 2006 that all pharmaceuticals products sold to hospitals must now bear a bar code on the smallest unit of use — the size dispensed to the patient. Bar coding of medicines to the single unit also assists in the management of medicines alerts and recalls.

The European Association of Hospital Pharmacists (EAHP) therefore calls on decision makers, politicians and national administrations to implement bar coding of medicines to the single dose administered in hospitals in national and European regulations.

The Netherlands is hoping to play a pioneering role in the introduction of a uniform system for registration of the administration of medication. In an interview with GS1 Netherland (English translation available HERE), the President of the Dutch Association of Hospital Pharmacists (NVZA), Tjalling van der Schors highlighted his hopes that the current Dutch cabinet will take the necessary steps for the compulsory introduction of uniform barcoding on primary medication. Improved patient safety and the minimisation of administration errors are benefits mentioned by Mr van der Schors. The implementation of the Delegated Regulation laying down detailed rules for the safety features appearing on the packaging of medical products for human use could have been an excellent opportunity to introduce the registration of the administration of medication. This chance was however missed.

His hopes now rest on the former Dutch Minister of Health Edith Schippers. She informed the Dutch Parliament in early February 2017 by means of a letter that all parties concerned needed to take steps to introduce barcoding on primary medication packaging as a matter of urgency. She based this viewpoint on the conclusions of the report 'Barcodering op de primaire verpakking van geneesmiddelen in ziekenhuizen; een kosten-baten analyse' (Barcoding on the primary packaging of medication in hospitals: a cost-benefit analysis) by Capgemini Consulting, which had been commissioned by the Ministry of Health, Welfare and Sport. 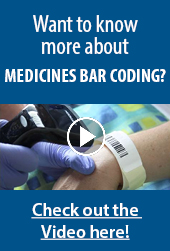